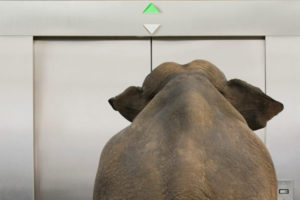 This blog is a continuation of: “Elevator Industry Releases Report on the State of Reliability in Ontario – What About the Elephants in the Room? – Part 1”

I had to smirk when I read the introduction to the Background and Overview section of NEEA’s report (found here).

“NEEA serves as the voice of the elevator and escalator industry across Ontario and throughout Canada.”

Odd, since the Canadian Elevator Contractor’s Association (CECA) has over 100 member companies, including 3 of the 4 multinationals who are the primary members of NEEA. I thought CECA had been very gracious in overlooking this obvious and intentional slight. That aside, what about the responsibility that comes with being “a voice”, let alone “the voice” in an industry? The most basic responsibility of being recognized as a respected leader is to lead by example. Eleanor Roosevelt said: “It is not fair to ask of others what you are not willing to do yourself.” Once again, I agree with the substance of NEEA’s response to Bill 109, Reliable Elevator Act 2017, but I can’t help but address the elephant in the room – that being the consistent, disreputable conduct of many of the NEEA members.

One of the cornerstones of business interactions is a contract. A contract objectively identifies what each party will contribute to a business arrangement. In the case of elevators, an elevator contractor provides a contract to an owner specifying the services they will render, and in return they specify the terms of payment required by the owner. This is a simple concept that I could easily explain to most elementary school children. A breach of contract would therefore occur if either of those parties did not follow through on their obligations – either the contractor not performing what they promised, or the owner not paying in the manner specified. Once again, this is a fairly simple concept that most children are taught early in life.

Having worked in many industries, I have been gob-smacked at the massive disparity that exists in the elevator industry compared to any other industry in which I have worked. I have been in situations in other industries where I have seen “breach of contract” on an exception basis, however, in the Ontario elevator industry, being in breach of contract seems to be the norm amongst NEEA members.

We are consistently called into buildings to undertake maintenance surveys where NEEA members are the maintaining contractor. The owner will have a monthly maintenance agreement in place, however, when we survey the log book (the Maintenance Control Program – MCP), we see that at best the elevator technician has been arriving quarterly, and unfortunately and far too frequently, they have not even been meeting the minimum legally required quarterly maintenance. Sadly, this is much closer to the rule rather than the exception. This isn’t just anecdotal evidence.

While it seems almost absurd to even pen this, another important factor to being considered as “the voice” of an industry, is to not break the law. In the past two years 2 of the 4 primary NEEA members – Schindler, and Thyssen Krupp (“Schindler fined $80,000 for Safety Violations” ) have been charged by the TSSA and convicted by the Ontario Court for safety violations. In fact, just two week ago, Thyssen pled guilty to 5 offences under the TSSA Act and was fined a total penalty of $625,000 “Thyssen Krupp fined $500K for Safety Violations”.

If the NEEA members want to be respected as a serious “voice” in the Ontario elevator marketplace and beyond, then it would be highly advisable to incorporate a new level of corporate integrity, the same integrity that they are expecting from the building owners, the TSSA and politicians. Simply put, at a minimum, meet the requirements of the law, and perhaps consider fulfilling your contractual obligations to your clients. Until that happens, I’d strongly suggest that NEEA stop referring to themselves as “the voice” of the elevator industry.

There is much that is good in both the Reliable Elevator Act and NEEA’s response to the proposed bill. It is sad, however, that the credibility of many of the voices are drowned out by elephants trumpeting in the room.

Elevator One A Typical Elevator Company Elevator One’s clients have the lowest level of unscheduled repairs of any other elevator repair company... END_OF_DOCUMENT_TOKEN_TO_BE_REPLACED

These are some of my personal observations and suggestions from many years of involvement in the elevator industry and in running elevator... END_OF_DOCUMENT_TOKEN_TO_BE_REPLACED

Is an MRL the best choice for my building? The answer depends on a lot of factors. Here are some of the... END_OF_DOCUMENT_TOKEN_TO_BE_REPLACED