This past summer one of the elevators we service in our region made the news – which is rarely a good thing.  Video footage of elderly residents slowly climbing stairs at the county-owned Senior Citizens complex, was just a tad uncomfortable for our team to watch.  What the local news agency didn’t know at the time, is that we were performing backflips in the background and pulling every favour we could with our supplier to super-expedite delivery of a new inground hydraulic cylinder.  In the end more of the story came out (after the elevator was back in service), and everyone was ecstatic, but it made us ask: “what can we do to avoid ever going through this again”?

Some Technical Details and Some History
Simply speaking there are traction (roped elevators) and hydraulic elevators.  Hydraulic elevators can be holeless (i.e., the hydraulic cylinders can be above-ground, attached to the side of the elevator cars), or they can be inground (inserted beneath the car in a hole drilled to the length of the cylinder – the travel of the car).

Prior to 1978, the cylinders that were installed (made of steel), simply had an exterior cylinder with a hydraulic piston in the centre which moved up or down depending on whether hydraulic oil was pumped into or released out of the cylinder.  The challenge with this design is that cylinders live underground, often in a wet environment which can cause corrosion.  Unfortunately, in 1990, two passengers in Ontario were seriously injured (EDB Director’s Ruling #79/90)  when there was a catastrophic failure where the cylinder was ruptured due to electrolysis, permitting the hydraulic oil to burst out of the cylinder and allowing the 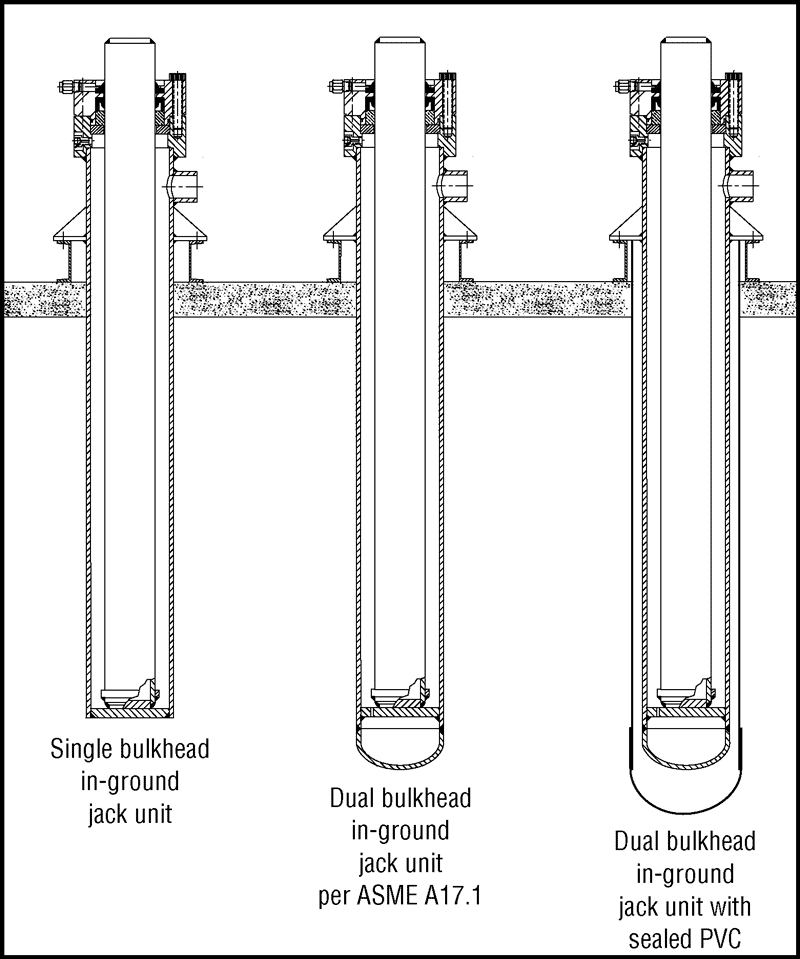 elevator to descend rapidly.  In a second incident, an elevator mechanic was injured when the loss of pressure allowed the rapid, uncontrolled descent of the elevator car into the pit while he was working on cartop, again as the result of a catastrophic cylinder failure.

Beginning in 1978, manufacturers made a significant improvement to hydraulic elevator cylinders by designing in a double bottomed (dual bulkhead) cylinder.  This drastically reduced the chance of a catastrophic failure of the cylinder as studies found that the most susceptible areas were at the bulkhead weld.  If a hole developed on the weld of the cylinder, the hydraulic oil would now leave in a slow and controlled fashion.  While the elevator would still be out of service, it eliminated the risk of the elevator suddenly falling.  Many of those single bottom cylinders still existed though, so in March of 2012 the Technical Standard Safety Authority (TSSA) published an Order that required that all single bottom cylinders be replaced prior to May 1, 2015 (TSSA Information Bulletin 243/10).

Technology has brought significant improvements in the past decades, and starting in April of 1992, a new requirement for corrosion protection was introduced.  Beyond just the double bottom bulkhead, these cylinders are now inserted into a corrosion protective PVC casing, thus protecting the steel cylinders from electrolysis and corrosion.

The Issue Today
This still leaves a gap of old technology for any “inground hydraulic elevator” installations between August 1978 and April 1992 (approximate TSSA installation numbers between #31909 – #65421), where inground cylinders were not protected by PVC containment.  Back to the unfortunate incident with our Senior Citizen customers, while they did not experience a catastrophic failure, nonetheless the elevator was out of commission with no warning and for an extended period of time.  With manufacturing lead times (cylinders are custom built to the exact travel requirement) of typically 8 to 12 weeks, such unplanned shutdowns are devastating for elevator owners, their riders and also for elevator contractors.  For this reason, we are recommending proactive planning for replacing such cylinders.

A Planned Modernization
For the reasons outlined above, we are strongly recommending the replacement of all inground double bottom cylinders (TSSA installation numbers falling between approximately #31909 – #65421).  Note, only a portion of elevators installed within this timeframe are inground hydraulic elevators; others would be holeless hydraulic elevators or traction elevators or accessibility devices.  Elevator One will be reaching out to our customers who have elevators with double bottom cylinders (with no PVC protection) to recommend a modernization and to provide a quote where requested. Even if you, as an elevator owner with such an elevator, are unable to undertake a project today, it would be wise to budget in the money for a future capital project (in the short to near term).  A planned project will allow you to provide notice to riders of the shutdown start date and an approximate downtime for the work.  It will also allow you to make the necessary arrangements during that time (i.e. the Seniors Citizen Home had some residents stay with family for a time, and for those who had to remain, they hired extra staff to deliver meals and other supplies to the upper floors).  Downtime of the elevator is also only for the period of time that the work requires.  Again, an unplanned shutdown is immediate and with a significantly longer downtime (troubleshooting, creating takeoffs, ordering the cylinder, TSSA submissions along with engineering, shipping of cylinder, and then finally the site work and TSSA inspection).

*Note:In these projects, there are times when you remove the existing hydraulic cylinder and find out that the caisson (a steel cylinder that the hole driller affixes in the ground after drilling to keep the hole from filling in) is not suitable to reuse. In such a case, a driller needs to come back to re-drill and re-install a new caisson.  Because we have specialized equipment to minimize this occurrence, in our experience this happens less than 10% of the time (more frequently with others). If, however, the hole needs to be redrilled with a new caisson, this would add about 2 weeks to the project timeline and between $30,000 to $50,000 (to either the unplanned or the planned shutdown).

Plan proactively to avoid the significant pain of an unplanned shutdown!

Rolly has been in the elevator industry for over 20 years in both a sales role and running an Operations Department.  He works hard to help implement methods to provide superior service to Elevator One clients.