Why am I being asked to pay for 5 year elevator testing?

Five year tests have long been a requirement

Some five year elevator testing has long been a requirement of the B-44 Safety Code for traction elevators. These reasonably straightforward tests were intended to ensure that basic safety features of a few specific components such as buffers and governors were working. These tests were traditionally included in elevator maintenance contracts so building owners or managers would typically not see an extra bill for this work and likely did not know they were even happening. Recently, however, these same owner/managers would likely be receiving proposals or bills for 5 year testing of elevators, often for significant amounts of money. Following is background on the testing and reasons for the costs, which can often be significant.

The current elevator code B-44-10 has clauses 8.6.4.20 and 8.6.5.16 which require that the elevator contractor perform, depending on the elevator type, five to ten Category 5 tests every 5 years. This includes the Category 5 full load safety test and an overload brake system test. These new five year tests have been required since the adoption of the maintenance section of the code effective April 1, 2014. This means that if five year tests are now due, then the new test will have to be done according to the new clauses 8.6.4.20 and 8.6.5.16.

Some of the new tests require that full load over-speed safety tests be conducted and also an over full load brake test. This safety test involves loading the car with test weights to full capacity, such as 1160kg or whatever the rated capacity, running the car up to full speed and initiating a drastic emergency stop. For traction (or electric roped elevators) an additional brake test has to be done by loading up the elevator to 125% of its load capacity.

One of the significant challenges of this testing occurs with what is called Roped Hydraulic Elevators. These units require an over-speed governor (a brake triggering mechanism that automatically initiates a stop of the elevator if it is travelling too fast). The challenge is that this governor would typically be easily accessible in the machine room for an overhead traction elevator, but for a roped hydraulic elevator they are usually located at the top of the elevator shaft. The elevator mechanics have to find some way to trip this governor while having the car descend with full weight at full speed. This is doable but requires significant amounts of work and set-up.

Tripping the governors on overhead traction elevators is more straightforward since the governor is accessible in the machine room, but as mentioned above, the elevator contractor needs to bring in and load more weights as they are required to conduct 125% brake testing. 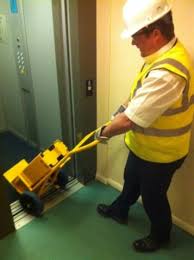 Why am I being asked to sign a waiver?

One significant challenge in this testing is that it likely has not been done since the unit was first inspected and commissioned (currently in Ontario by TSSA, but previously by MCCR). For some elevators this could be decades since it was done and for the very old elevators, a full load test may never have been done. The significant worry, the very serious question is what is going to happen to the elevator equipment and even the elevator hoistway and building when this test is conducted. Engineers understand that there are significant inertial forces created when you load or overload a piece of equipment, have it travel at full speed and then do a dead stop. This puts tremendous pressure on the elevator equipment and the elevator hoistway (the elevator rails, support beams and their contact points with the building in particular). The elevator contractor cannot be held responsible for any resulting damage. Any competent elevator contractor will do everything in their power to conduct the tests as safely as possible and in a fashion that minimizes the potential for damage, but ultimately they have no choice but to conduct the tests as required by the code.

What is a reasonable cost for these tests?

Reasonable costs for standard elevators for full load testing would be in the $2,000 to $5,000 range per elevator. If what you are being quoted is substantially different from the above, you may want to address this with your contactor.

Are these tests mandatory? What happens if I don’t do them?

These tests are absolutely mandatory and in Ontario it is the TSSA’s obligation to enforce them. While these costs may seem very high, it needs to be understood that this change to the code is a very good one. Owners and riders of elevators assume that their elevator is operating as designed. If it says 1160kg capacity in the car, the rider would reasonably assume that they could have at least that much weight in the car and if the car begins to travel in over speed they will be safely stopped. Since these tests were traditionally only done once when first commissioned, it seems only logical that they at least be done every 5 years thereafter.

If the tests are not done within 5 years, the TSSA in Ontario will shut the elevator down as they cannot be confident that the elevator meets the current elevator code and therefore is a risk to the public. Beyond TSSA’s concerns, it also becomes a liability to the owner since they are knowingly refraining from conducting mandatory safety tests on an elevator used for the public.